Queen Zenobia & the City of Tadmur 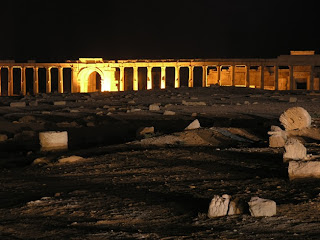 Zenobia (around 240-after 274) was a Syrian woman who lived in the third century. She was a Queen of the Palmyrene Empire and the second wife to king Septimius Odaenathus. Upon his death she became the ruler of the empire. In 269, she conquered Egypt expelling the Roman prefect of Egypt, Tenagino Probus, whom she beheaded when he attempted a recapture. She then proclaimed herself Queen of Egypt also. Ruling until 274 when she was defeated and taken as hostage to Rome by Aurelian. Zenobia appeared in golden chains in Aurelian’s military triumph parade in Rome. So impressed by her, Aurelian granted her clemency, and freed Zenobia. Further, he granted her an elegant villa in Tibur (modern Tivoli, Italy). She lived in luxury and she became a prominent philosopher, socialite, and Roman matron—and prominent Romans are counted as her descendants.


Brought to you by Hellraiser at 7:34 PM